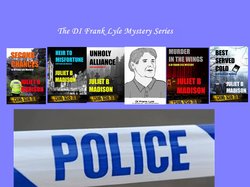 One of the reasons why fiction series keep reader’s attention is the constant introduction of itinerant characters.  In a detective series these itinerants usually constitute murder victims, their families and the people who commit the crimes and in this aspect the DI Frank Lyle Mystery series is rich. The core characters usually remain the same; although of course what happens to them as a result of events in the main story arc does change them as they mature. Events such a new romance, breakdowns of established relationships and deaths of loved ones shape characters and not always in a good way. It’s a chance for writers to test their characters mettle and see what they’re really made of when they’re against it.

The DI Frank Lyle Mystery Series is no exception; from the brutal murder of DS Sunil Desai in Second Chances, which changes DI Lyle forever to being raped by the friend of an old boyfriend, all DI Lyle’s team face challenges.

I thought I’d use this opportunity to look at new faces that will come into the series in the next few books and the impact they will have.

As far as policing Ashbeck is concerned there will be changes. Dead on Arrival will see the reintroduction on a permanent basis of DCI Martin Lawson. Readers of the series will have met Lawson in the novella The Wasteland in DI Frank Lyle’s Casebook Vol 2 as well as in Best Served Cold. We don’t really know much about Lawson at this stage other than that he is married and has an adult son studying veterinary medicine in Edinburgh, but I look forward to getting to know him better.

Dead on Arrival will also see the return to duty of Sergeant Timothy Harding following his heart attack in Murder in the Wings.

Dr Robert Bradley, the pathologist, is due for retirement so I felt it was time to come up to date and replace him with a female pathologist.  Dr Carolyn Medhurst will be joining the series in the near future.

Ania Franklin, a Polish born interpreter, will be brought in to assist the team. She’s a widow with no children and her maiden surname is unpronounceable to the British tongue. She catches the attention of lovelorn DS Mark Slade and, for once, his passions will be reciprocated. I felt he deserved a break after a long term crush on Jayseera and then DC Mahon, whose type he never will be on account of his gender.

Now that her son, Sunil, is ten Almira Desai is considering moving on and looking for new love. She’s sure her late husband, Sunil, would not want her to be alone forever. Since Sunil’s murder, Almira’s brother, Jamal, has been a great help and a role model for little Sunil. Almira remains close friends with Frank & Jayseera Lyle. When Jamal is injured in a freak accident Almira decides it’s high time she learned to drive. Her instructor, whose name I haven’t decided on yet, is a Hindu widower with a nine year old daughter, Meena, and Almira must decide whether to take a chance on romance for a second time. Since they are both widowed with children they are on an equal footing from which to pursue new love.

Alice Maddox is a friend of DS Fox’s late mother and she will emerge from Australia following a broken marriage, but the information she holds looks set to irrevocably blow DS Fox’s world apart.

Well, this is just a glimpse into what readers can expect in the future of the DI Frank Lyle Mystery Series. If you have any further suggestions for new faces please use the contact form below.