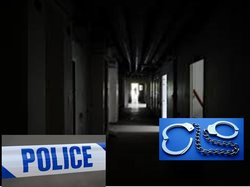 I like writing police procedurals and while DI Lyle hasn’t made me a NY Times bestseller and multi millionaire I’m extremely fond of him.

However I have recently had an idea for a new futuristic paranormal crime series. I wanted to talk about that with you today.

Although I originally intended for the series to be set in 2060, I've revised and changed to 2040 as 2060 seems too far into the future. 2040 will be a time when the testimony of Psychics will be admissible in court and mediums considered valuable Expert Witnesses whereas today no one takes them seriously. The genuine ones are tarred with the same brush as cop-bothering charlatans who would not know a genuine psychic feeling from a hole in the ground. It will be a combination of police procedural and psychic investigation. I can afford to be somewhat inventive about what forensic techniques may be possible by then. I would have thought the murder clear up rate would be 100% if mediums can find out who killed murder victims.

The general preference for the series title in my recent poll is Psychic CID so the poll is now closed.,

DI Evelyn Lynch is a shrewd woman in her forties. She’s about five feet nine with long dark hair and eyes. She looks a little like Special Agent Ziva David in NCIS. (Just in case Cote de Pablo is ever available if it gets filmed, but sadly there is more chance of a piglet being born with wings.). She is not a medium per se, but can intuitively pick up on spirit messages and feelings although she’s not strictly what the psychic world calls an Empath.

Those of you who follow the DI Frank Lyle series and have read interviews I’ve done will know that my original idea for a crime story was about a detective asked to reopen a cold case and discovering he is a reincarnation of the original murder victim. At the time though I wasn’t sure I could do that although I kept the reincarnation aspect by making DS Sunil Desai a Hindu. I now feel that, having flexed my crime writing muscles a bit, I am ready to build on this original idea. It does not seem as daunting as it once did at any rate.

As well as reincarnation, the series will also investigate other crimes with a paranormal flavour, for example murders committed by people the team believe are possessed by the spirits of deceased murderers.  Incidentally at the time of the series possession of Ouija boards is illegal and carries a stiff penalty for repeat offences.

I want to write a crime series which is different from the run of the mill private detective or police procedural thriller. However I am aware I may need to find a new cover designer as I suspect my current one will not feel comfortable designing covers for books that conflict his religious beliefs and I would not expect him to. I respect his beliefs although I do not share them. I also feel that Christian readers may not like this series either, but the DI Lyle series has Christian characters such as DI Redfern and Canon Rice.

So vote in the Poll and I look forward to bringing DI Evelyn Lynch to life very soon.