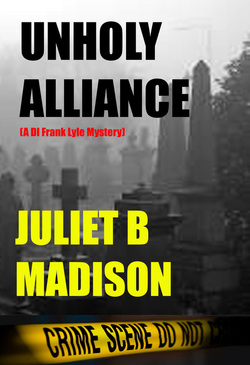 The brutal murder of a curate at an ecumenical conference leads DI Lyle and his team to uncover the shocking and somewhat tragic past of the victim, Reverend Martin Hayes,whom no one appears to have known very well.

Assisted by Canon Thomas Rice, a former police officer, DI Lyle works his way through a tangled web, which leads to a recently released prisoner with a deep-seated hatred of the church. Can DI Lyle penetrate the unholy alliance formed between the ex con and a corrupt police officer? And will a little knowledge prove a dangerous thing?

While I love  - and indeed am very proud of - all the DI Lyle books I have to say that this one is my personal favourite.

Most of the DI Lyle books begin with the discovery of a body, but Unholy Alliance begins with a happy event, the wedding of DI Andrew Redfern & DS Tanya Lomax, who he met through the Heir to Misfortune case.  Readers should be reminded at this point that Redfern is divorced with a teenage daughter, Maria, living in Ibiza with her Spanish mother, Consuela.

The discovery of Reverend Martin Hayes’ horribly mutilated corpse in St Luke’s churchyard on the inaugural day of a Church of England ecumenical conference is definitely not to be read just after lunch and the excerpt shared later on this page will show exactly why. It makes grim reading.

But what secrets lie in Reverend Hayes’ past which led to his brutal demise? DI Lyle & his team discover a secret and a trail of failure and unhappiness before Hayes joined the church.

They are ably assisted in this case by Canon Thomas Rice, a former police officer, who has secrets and issues of his own.

In DI Redfern’s absence (he & Tanya are on honeymoon) Superintendent Kingsley has brought in DCI Mike Hammond and his appointment does not prove to be the best decision she has ever made; one that she will seriously come to regret.

The cameo role in Unholy Alliance belongs to my good friend, Caroline Lee.  In the novel Caroline is a doctor’s receptionist who holds the key to a mystery and unsolved crime. The multi-talented Caroline has also helped me out considerably by doing character sketches of Di Lyle, DI Redfern, Jayseera Lyle and James with his boyfriend, Thomas.

The question is will DI Lyle & his team find Reverend Hayes’ killer? Will a little knowledge prove a dangerous thing?

I was also assisted by the Reverend Judy Davis, chaplain to Duchess of Kent House hospice in my hometown, Reading, who gave me a few pointers on church protocol and also my clerical writer friend Reverend Clive Clapson, author of the wonderful book The Holy Innocents about a misplaced Episcopalian cleric and his somewhat unusual flock.

I don’t actually believe in God and in that respect I am like DI Lyle who is profoundly agnostic.

I have friends who are Christians and I wanted to portray them as anything other than the weak wishy-washy characters they are sometimes portrayed as by literature and on television. DI Redfern is a Christian, although he gets married in a registry office, and Canon Rice is one who doesn’t always have the level of faith he thinks he should have, but he sees both good and bad in people on account of his former career as a Detective Sergeant in York. He is not as naive as some about the purity and inherent goodness of human nature because he has stared into the abyss.

Canon Rice will appear again in future books, namely my current work in progress Dead on Arrival, which I hope to release late spring/early summer of 2015. He also appeared in my Nanowrimo 2014 novella Prescription for Murder. He seems to have proved popular with readers irrespective of their beliefs.

Here is a chilling excerpt from Chapter one of Unholy Alliance.

“Evening DI Lyle Sir.” The PC at the cordon said.

“I hope you haven’t just eaten Sir, it’s not, well not a pleasant sight, DI Ward could not have handled it.”

DI Simon Ward had been dismissed earlier in the year for leaking details of the Kenyon investigation to the Ashbeck Courier. He had been of a somewhat squeamish disposition. Inspector Morse seemed to get away with an inherent dislike of such things, but I preferred my officers to be made of stronger stuff. “Evening Guv,” A familiar voice. DS Mark Slade came towards me. He had been promoted, along with Redfern, following the satisfactory resolution of the Kenyon business.

“It’s not a pretty sight, Guv,” he said. “They got some big league church conference on this weekend, so they got bishops and everything around the place. I’m on my way to have a chat with the vicar. He found him. I’ll catch you in the rectory later.”

I put on a sterile gown and overshoes before taking the regulation extra strong mint offered by Dr Bradley’s assistant, Kieran.

I then ventured into the next tent. I swear I will never forget what I saw for as long as I live.

Dr Bradley was bending over the naked inert torso of what I presumed had once been a young man.  His face was a bloodied pulp and his body was soaked with blood. On his chest bleeding marks spelt out the message “I have sinned.” and the man’s penis had been cut off and thrust into his mouth, halfway down his throat. There was a clerical collar wrapped around the shaft of the penis. I felt acrid bile rise into my throat. I took a few deep breaths.

“What have we got Doc?” My voice did not sound like mine.

“Reverend Martin Hayes, curate.” Bradley said. “I hate to tell you this Frank, but none of these wounds or the castration was done post-mortem. He was still alive.”

“I’ve taken blood samples to see if he was anaesthetised in any way, to make it more bearable, but I don’t hold out much hope. There are defence wounds to his hands, so at least he put up some sort of fight, which means we may get some DNA from under the fingernails. He’s been dead between four and six hours, so I put the time of death no earlier than 6pm and no later than 8 pm,”

I glanced at my watch it was just after midnight.