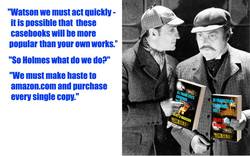 A young woman, Kate Martindale, is abducted and the only witness is a frightened young man with learning difficulties. Can DI Lyle get the lad to talk in order to find Kate? And what is the secret that her friend’s father is hiding?

A park attendant clearing snow finds a mutilated body in the pond. But what secret is the dead girl’s sister hiding? Help from an unexpected source helps solve the mystery, but can it be done before another related murder occurs?

When a young first year student is found dead in her room, DI Lyle is called in to investigate. There are no real clues as Julia Watson appeared to have had no enemies or vices, but a diary found at the scene reveals an explosive secret from her past and the key to her identity.

Call of the wild

The body of Tony Hickman, a young male volunteer, is found at Ashbeck’s animal welfare shelter. The contents of his locker reveal a possible connection to violent animal rights groups, but as DI Lyle discovers, the truth is actually closer to home and far more sinister than he could ever have contemplated.

When Reverend Tom Berry, a hospice chaplain with controversial views, is deliberately injured in a hit and run, DI Lyle is bound to find out who is responsible. With the help of a witness and his friend, Canon Thomas Rice, DI Lyle sets about solving the mystery. Berry had enemies in both the church and the medical profession, but which of them wanted him dead? Meanwhile James Lyle, who witnessed the incident, has things to resolve in terms of his own life

This second Casebook has proved more popular than the first.

The five stories cover a range of subjects, some of which may be considered controversial.

Homophobia, paedophile rings, poisoning, political activism, domestic violence and campaigns for the individual’s right to die are all featured, as well as corruption, greed and various motivations come to light, some understandable, others not.

On a lighter note James Lyle, who witnesses a crime on his twenty-first birthday, agrees to go for a drink with DC Thomas Fox, an event which paves the way for their future relationship.

Call of the Wild was my first story dealing with murder by poison. It is traditionally believed that women favour poison as it does not take a great deal of physical strength or violence to administer. Most of the poisoners in Victorian fiction as well as in Agatha Christie’s books, were female.

Okay poison may not take much physical clout to administer but it certainly wreaks its share of violent havoc as it works its way through the victim’s system. I chose Ricin as it’s not commonly used in fiction and I was shocked as I read about the terrible effect it has on internal organs between ingestion and death.  It was disturbing to write, more so than a lot of scenes I have written although some of the domestic violence scenes were hard as well although thankfully I don’t write these scenes from personal experience.

It’s worth noting that the story Dead of Winter which features domestic violence was set in 1989. Unbelievably marital rape did not become a crime in England & Wales until 1991 whereas it has been a criminal offence in Scotland since 1982.