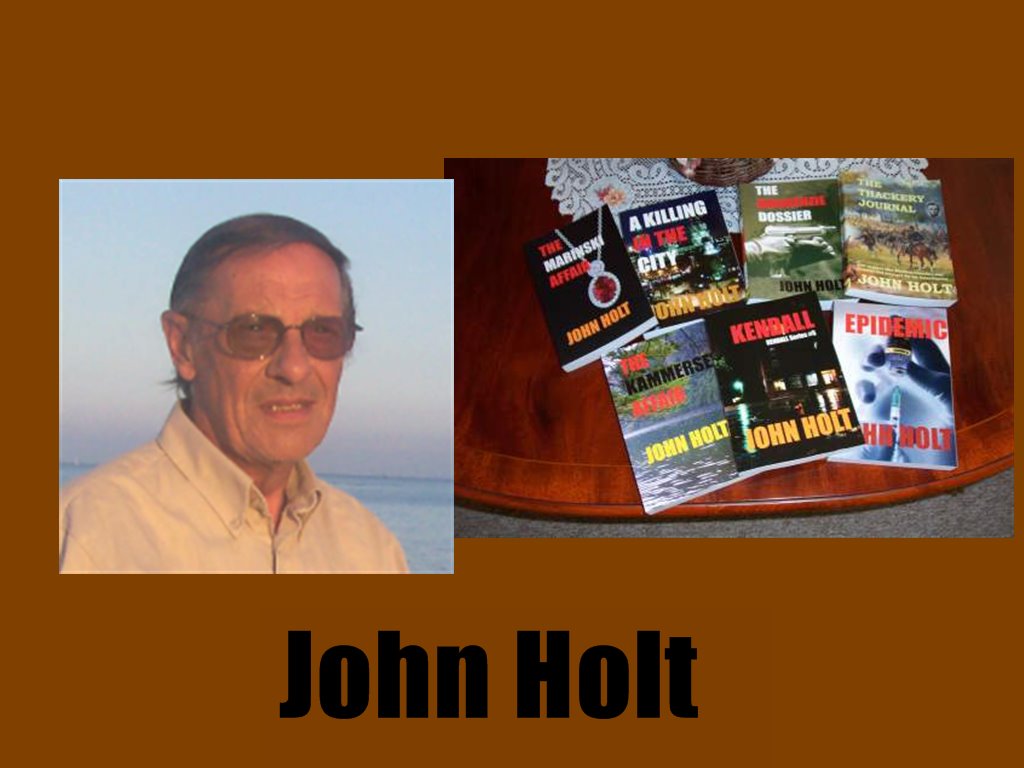 I’m delighted to welcome my good friend, John Holt to the site to talk about his Tom Kendall Private Detective series & his new Jack Daniels PI novellas. For those of you who don’t know, John is responsible for the fantastic DI Lyle series book covers.

JULIET:   John it’s great to have you here. What’s your reaction to the reception that your books have received?

JOHN: thanks for inviting me. That’s a great start, but it’s not that straight forward. You know as well as I do that some people will love your work, others will hate it. You can’t please everyone. So I’m glad to say that, generally, most people seem to like what I do. That is very gratifying.

JULIET:  I suspect this will be a tough one, but out of all the books you’ve written which is your favourite and why?

JOHN; Naturally I like all of my works, but I suppose if it came to the push I would have to say “The Thackery Journal”. Not because it has been a major seller, because it hasn’t sold that well. “The Thackery Journal” is a total departure from my normal Private Detective novels, and way outside my comfort zone. So much so that some people have asked why did I write it?  That’s a good question, and like much in life the answer isn’t straight forward.

I have always been fascinated by the American Civil War. A Civil War is the worst kind of war that there could be. A war that divided the Country and split communities: a war that put brother against brother, and father against son.  A war where in reality there were no winners and the effects would be felt long after the war ended.  But that in itself is hardly a reason for writing the book.

I started to write the novel about five years ago. I had a couple of good chapters at the beginning, and a couple at the end. In between I had about 100 pages of research, and I was well and truly stumped. And I stayed stumped until about April 2013. Then suddenly the whole story came to me, and I finished the novel and published it in August of that year.

JULIET: Is your detective Tom Kendall based on anyone you know or is he just your idea of what a Private Investigator should be?

JOHN: Simple answer is no. Kendall resulted from an attempt to recreate the old detective stories by Chandler. It didn’t work, but I ended up with something so much better. I ended up with a unique, original, character that seems to be quite popular.

JULIET:  What do you most like and dislike about Tom Kendall? What do you see as his main strengths and weaknesses?

JOHN: There’s a lot of me in Kendall. We both have a wicked sense of humour; we both take our time thinking things out; we are both stubborn and once we get an idea it’s difficult to shift; we are both determined. I guess determined is probably his main strength. His main weakness, without a doubt, hamburgers.

JULIET: Since you’re British did you have any problems getting to grips with any aspects of US police procedure and if so why?

JOHN: To be honest I never gave it a thought. Kendall is a private detective. He does his own thing, in his own way. As for the police they are really only an incidental.

JULIET: Do you have a favourite subgenre of crime fiction? If so, what is it and why?

JOHN: I guess it’s what I write - mystery

JULIET: Do you read other genres of fiction or do you read mainly crime?

JOHN: I mainly read crime, but I also read thrillers, but I have to admit that they are stories by authors I enjoyed back in the 1970’s – Alistair Maclean, Hammond Innes, and Wilbur Smith.

JULIET: Which crime novel do you wish you had written and why?

JOHN: The greatest crime novelist to me is Agatha Christie. I would love to have written any one of her novels.

JULIET: If Tom Kendall could invite any five famous people (fictional, living or dead) to share a takeaway with him who do you think he’d choose and why? (Not including other characters in the Tom Kendall series)

JOHN: To start it would be Agatha Christie, and Poirot. Then we would add Sam Spade. And how about Sherlock Holmes, and Jessica Fletcher. I think it would be interesting to compare methods of detection. I wonder if they would learn anything from Kendall.

JULIET:  What, for you, are the best and worst aspects of self promotion?

JULIET: What are you working on right now? Can you give us an idea of what it’s about?

JOHN: I am currently working on a series of private detective novellas. This is a new departure for me, and they are being written in a different style. I therefore decided to create a new private detective, Jack Daniels. The first novella “The Candy Man” was published on 22 February. The second, “A Dead Certainty” is about 50% complete; and I’ve made a start on the third “Trouble In Mind.”

JULIET: Where can readers get copies of your books?


JULIET: Please could you share a brief excerpt of any one of your books with us?

JOHN: This is taken from “The Candy Man” – Finally it has stopped raining, and Daniels comes out of a bar. He sees a young woman, and starts to follow her. Why?

Okay so I saw her, what about it? I could have walked by, couldn’t I? So why didn’t I? Dozens of other people walked straight past her. They never even gave her a glance. So why me, why did I stop? Nobody was forcing me to stop were they? There was no one pushing me in her direction. There wasn’t a sign with a pointing arrow, saying ‘this way.’ So you tell me.

Perhaps it was because she looked like she was crying. I’m a sucker for women crying. I hate to see it, I just can’t handle it. I just have to help, you know.

Or maybe it was because she was good looking. Trim figure, nice face, sensitive you know. Five feet four or thereabouts, hundred and ten I guessed. Age, about twenty-five, or twenty-six, maybe. Auburn color shoulder length hair, and blue eyes. Yes you would certainly say that she was good looking, no doubt about that. A good enough reason for stopping you might think. Well who’s arguing? Not me.

Or maybe it was the blood-staining on her coat that caught my attention. I tend to notice things like that. Comes from the years of training I guess.

JULIET: Where can we find you on social media?


You can also read my previous interview with John here 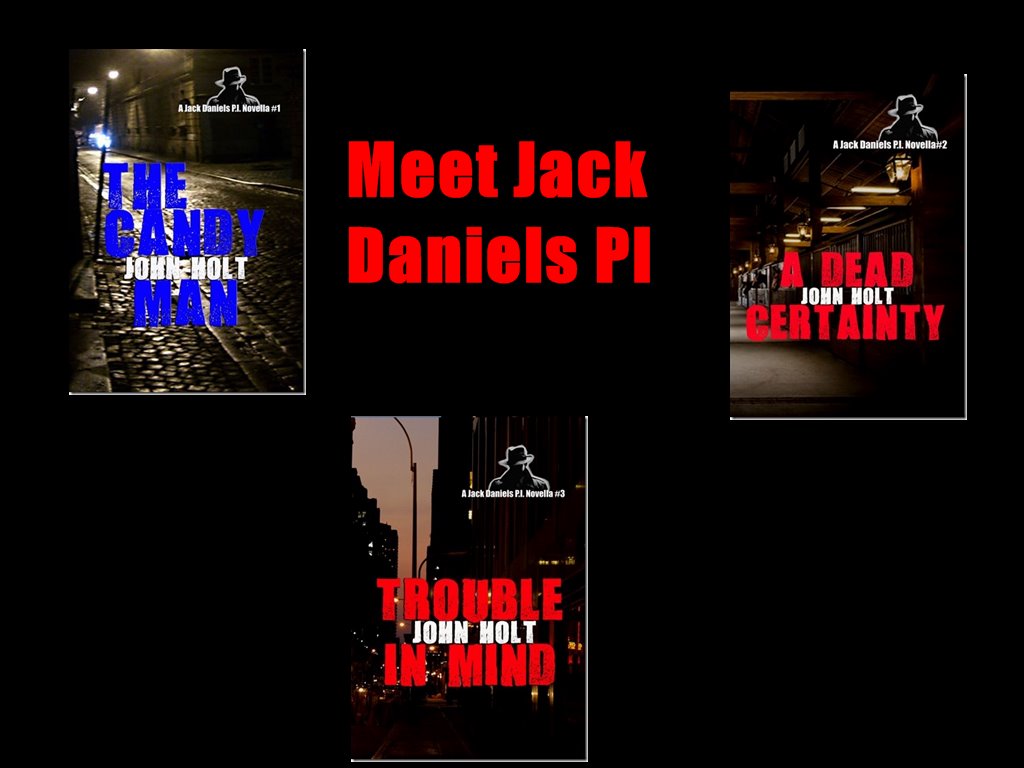