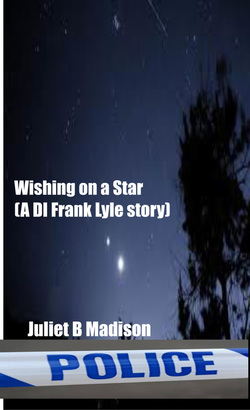 It was a bitterly cold December day. James Lyle was helping his mother, Sarah, and her boyfriend, Colin, sort through the box of Christmas tree decorations.

James’ heart was not in Christmas that year. The gilt of the occasion seemed to have dimmed. His mother and Colin, were trying to make the best of it, but James missed his father, Frank.

He had tentatively asked his mother if his dad could come to tea on Boxing Day, but Sarah scoffed, “Before or after he visits the mortuary to check on the latest dead person.”

“But Christmas is for families,” six- year-old James blinked away tears. He idolised his father. But James knew that his mum had left because she got fed up coming second to Frank’s job. Frank was a Detective Sergeant in Ashbeck CID. James thought that having a copper for a dad was pretty cool. If anyone was mean to him he could threaten them by saying “My Dad could arrest you.”

“Stop making out my dad’s a bad guy,” James said, “If you won’t let me see him I’ll run away and visit, so there.”

“Don’t be silly James.” Sarah said. She went to put her arms around her son, but James pushed her away.

“Colin isn’t my dad, so you’d best remember that,” he stamped his little foot.

Sarah relented. “I’ll take you over so that he can give you your Christmas present, but he can’t come here.”

“Don’t bother,” James snapped. He had been saving his pocket money since the summer and bought Frank a t-shirt with the Superman logo and the word Dad underneath. He had stolen some wrapping paper from a waste paper basket at school as he knew Sarah probably would not let him have any if she knew who it was for. James had not told Sarah he had bought Frank a present & he had also decided not to tell his dad he had nicked the wrapping paper because he knew taking things was a small scale version of what the bad men his dad put in prison did. James was blonde and blue-eyed, a miniature version of his father who stood at around six feet three. To James, Frank was a gentle giant who caught bad men so that people would be safe. He found it hard to understand that his mother didn’t see Frank in that way. James wished with all his heart that his parents would at least try and be friends, but all they did was shout at each other about things he didn’t understand. His half brother, Jez, who was a lot older, didn’t like Frank either, but Jez did not seem to like anyone apart from girls. He was going away for Christmas and James wasn’t sad about that.

James sulked as he helped them decorate the tree and then it was time for his bath and bed.

That night James looked out of the window, his head up under the striped curtains. It was a clear night and he saw a star. He wondered if it was like the one the wise men had followed to find the baby Jesus.

James closed his eyes and screwed his little face up in concentration.

“I wish I could see my dad for Christmas and that mum wouldn’t be mean to him.” he thought. He knew that wishes spoken aloud never came true and he wanted this one to more than anything.

DS Frank Lyle sighed deeply. He was not caught up in an investigation at that point in time which meant time dragged. Christmas was coming and he thought about James. He had bought presents for his son, but doubted he would get a chance to give them to him. It was Sarah who had left him for that jumped up twit, Colin, and because of that James had to suffer. Frank Lyle loved his son with all his heart.

“Penny for them, Guv,” the voice of DS Lyle’s colleague and best friend, DS Sunil Desai, broke into his thoughts. Desai was Hindu so would be working over Christmas as he didn’t celebrate it.

“You’re his father, Frank; you have a right to see your own son. The family court judge said that.” Desai said, trying to cheer his friend up. “The boy adores you and he doesn’t think you’ve done anything wrong, which is surely what counts.”

“Sarah has had time enough to poison the boy’s mind. Don’t forget that he’s only five, they say that’s a good age for making kids believe what you want them to about someone.”

“If she’s that dead set against you, she doesn’t deserve to have your son.” Sunil said, “She is building bad karma.”

“Knowing my luck, we’ll get called out to a murder on Christmas Eve and any hope of making time for what really matters will be lost.”

“There is always hope,” Sunil said gently, placing his hand on Frank’s shoulder.

“Right now that is ALL I have,” DS Lyle sighed.

The following day, December twentieth nineteen seventy-seven, James once again asked his mother about allowing his dad to come to Boxing Day tea. Once again the answer was a resounding “No, James.”

That night James Lyle cried himself to sleep.

He woke up in the night to go to the toilet and, once he was back in his bedroom, he resumed his position under the curtain, staring at the stars.

“Please make the bad people behave for just one day so that all coppers can spend time with their families,” he wished hard.

The next couple of days, James was very quiet at home. There was a bit of snow so he went out to play and built a tall thin snowman. He found some blue marbles for its eyes and put one of his dad’s old ties around its neck. He liked school and missed it, because it was the holidays. When James was inside having his tea – alphabet spaghetti on toast – Sarah Lyle went outside to scrape ice off her car and caught sight of her son’s snowman. She was surprised to find her eyes welling with tears when she saw the snowman’s blue marble eyes and the tie around its neck.

Sarah knew that she had left Frank because he had put her second to his job and she had never truly understood that he was born to be a detective, it was in his blood. She still loved him and, if she was honest, Colin would always be second best. She thought about James. Surely she could make an effort for just one day? It was hardly fair to keep her son from the father he clearly loved on Christmas Day. If Colin did not like it then he would have to lump it wouldn’t he?

When she went back into the house with red numb fingers after scraping the windshield James had gone upstairs to play. His empty plate remained on the table with an alphabet spaghetti message. “WANT MY DAD.” He had eaten everything bar those few letters. Colin had gone out to the pub.

When James was in bed Sarah tentatively picked up the phone.

“Frank Lyle speaking.” Sarah had always loved the sound of his voice.

“Hello?” His voice was guarded.

“I was just wondering? Are you caught up with anything major at work?”

“Not right now, and I had booked Christmas off to spend with our son.”

“How would you like to come to tea on Christmas Day? Colin will be down the pub with mates by then and James wants to see you. It’ll be cold turkey sandwiches and cake, nothing special, but it would mean a lot to him.”

“Jez is spending Christmas with friends so he won’t even know.”

“I’ll be there come hell fire and high water, or six feet of snow. Just don’t tell James yet.”

“Just so you know though, it’s for James, not you.”

Sarah swallowed as she hung up.

The snow had melted by Christmas Eve, which made James sad, but he had decided to do his best to at least pretend to be happy for Christmas.

His present for his Dad was tucked under his pillow. He was still trying to think of a way he could give it to him.

James opened his presents. He got lots of storybooks, a teddy bear, an Action Man figure and some Lego bricks. But he could not keep his mind off the present under his pillow, placing it into his dad’s hands would be a million times better than any present he could ever get.

He ate his turkey dinner and, in the afternoon, Colin went to the pub with some of his mates. James was upset about Colin leaving them on Christmas Day. His Dad would never have done that; at least not to go to the pub. He would have done something useful like arresting a bad person.

At about four o’clock the doorbell rang.

“Santa is an old man and old men do forget things sometimes,” Sarah said, “Why don’t you go and see who it is?”

James ran to the front door and opened it.

“Dad!” James screamed with delight. Frank Lyle scooped his son into his arms and held him close

Frank walked into the sitting room with James in his arms.

“Hello Frank,” Sarah’s voice was strained, “Would you like a drink?”

James stayed close to his dad, telling him about school and showing him his presents. Sarah found it difficult emotionally, although it confirmed that she had done the right thing by her son.

Frank gave his son three presents; a picture book about dinosaurs, a pair of pyjamas with a picture of a scary monster on the front, and a packet of Plasticine.

“Thanks Dad,” James kissed Frank and hugged him tight, “Hold on a minute, I have something for you.”

He rushed upstairs and returned minutes later with a soft flat package which he placed on his dad’s lap. Sarah looked puzzled.

“I saved up my pocket money,” James said, “One of the older girls in school; her mum took me into town while mum was at work to buy it.”

Frank opened the package and his blue eyes filled with tears. Sarah smiled when she saw the t-shirt.

“He is a Super Dad.” James said, “He catches all the bad men in Ashbeck and he can’t fly.”

They had a pleasant tea and Sarah really made an effort for her son’s sake.

James cried when Frank had to go, but his father held him tight.

“Thank you for the present, son.”

“You’re welcome Dad,” James leaned close and whispered, “I’ve been wishing on stars every night that you would come so it does work sometimes.”

“Thank you for the best Christmas ever, Mum.” James said when she kissed him goodnight.

“It was good to see you so happy, James. I will try to be nicer to your dad.”

DS Frank Lyle was almost floating when he drove home.

It had been a truly magical day; he had spent time with his son and been able to spend time in the same room as Sarah without a murder being committed, which was progress enough.

But James’ gift was the most precious thing he had and he intended to treasure it.

James went to sleep with a huge smile on his face. He didn’t like to think what might have happened had he not wished on those stars, but somehow he had a feeling that it really didn’t matter. He had spent part of the day with the dad he loved and there was nothing in the world that could compare to that, absolutely nothing.